Imagine my surprise when I realized that my trove of SCA appropriate over and under dresses didn't really match up with the evidence I have been amassing on my personas possible clothing choices.

As I have deepend my research into 10th century Norse female graves both in Scandinavia and Western Russian I have found more and more evidence that our "t - tunic" inspired wardrobes are...well wrong. There I said it now don't be mad just hear me out! The extant textile evidence tells us that maybe we are doing it wrong.
(Here is a link to my recent A&S Documentation for this very subject) 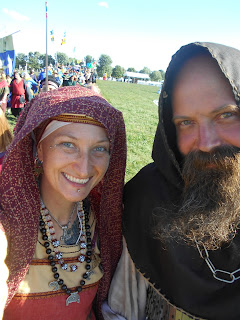 So my dear friends you might ask "Rannvaeig what is wrong with this picture?" Well let me tell you friend. Do you see my fantastic big scooped out neckline? Do you see all that fantastic, and tiny I might add, hand stitching that I used? Oh yeah I love that under dress and I am here to tell you friends that other than the fact that is was naturally dyed and made out of linen it is probably wrong. Very likely wrong and here is my evidence as to why.


In one the most respected articles on "Viking" or Norse under dresses also known as "serk" the author Hilde Thunem extensively researched and studied the evidence of under dresses from Norse graves (in this article) in both Scandinavia and Western Russia. In looking through this research again I have reformulated a thought long banished to the back of my mind because....God forbid it would mean I was going to have to remake my garb....seriously for the love of all things wholly!

Specifically quoting from her article "The practice of pleated linen seems to become more common in the 10th century, and only three of the 21 instances of pleated linen are found in 9th century graves."
caught my attention because well...I have a tenth century persona and I have gone to all the trouble to point out my ridiculously thin time period so yeah...my under dresses are not pleated (and neither is anyone of the other under dresses in the SCA who are portraying late "Viking" era personas.)

So lets talk about this "pleated under dress" business. How do we know that the under dresses are pleated? Glad you asked. The above quote was specifically referring to grave found in Birka, Sweden and below I will show evidence of similar under dresses in Pskov, Russia that are attributed to Norse graves. For reference here is a map to show where Birka and Pskov are: 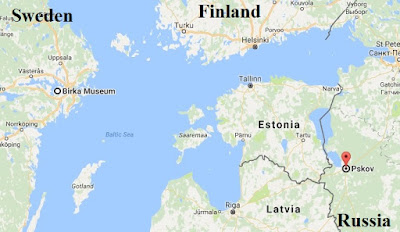 What is also interesting is that we have a partially intact neckline from a grave in Pskov from the same time period. This neckline that was found in Pskov was found in a birch box wrapped up around a pair of tortoise shell brooches which has identified it as a Scandinavian grave. (There is the link to the extant grave evidence) 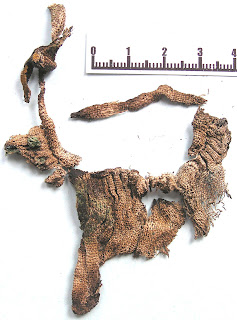 Here is a photo of the neckline. Grave 3 Pskov, Russia.

So with the evidence found both in Birka and in Pskov I wondered why we don't have gathered necklines that tie at the throat in the SCA? My conclusion......it is just "easier" to have a keyhole or round neckline because.....well everyone does it. That though does not make it period correct. I too made all of my under dresses with round necklines as a beginner because ....well I didn't know any better.
Here are some photos of my now corrected necklines. Maybe take a look at the evidence and see if you want...or need to change the neckline on your under dresses as well :) Then please post pictures so I can see them. 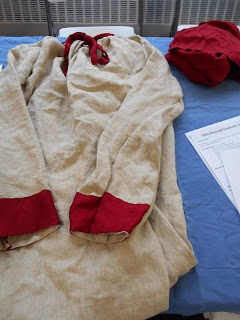 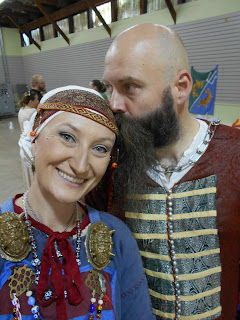 Blogs I Read That May Interest You.